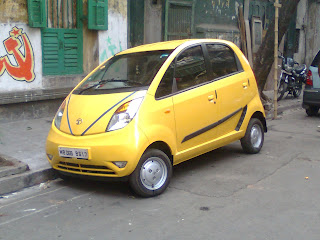 Tata’s promise of cheap(est) cars overlapped with the Left’s policy of development did not find too many takers in this state, but then the fruit of all the dreams that Ratan Tata saw and all the labour that had gone into realizing this dream has certainly found some admirers and customers in the city, with the ‘People’s Car’ being regularly spotted on the streets and elsewhere by curious eyes.
The city came to almost a standstill following the atrocities (which we are familiar with) committed in Singur(the original proposed site of the Tata factory), with intellectuals and opportunists, richer by many reasons, ready to pounce on the government and its policies, shouted slogans that expressed their repulsiveness to ‘industrialization’ and ‘Nano’.

One and a half years gone, this half-egg shaped car is running pretty smoothly on city roads, though in small numbers.

This car was spotted in Central Avenue.
Looks cute..
If only the land acquisition had been a little more fairer, then we would really have felt proud of our state.
But as they say, nothing goes the Right way in West Bengal.


The symbol on the wall and the car in the same pic..hmm..