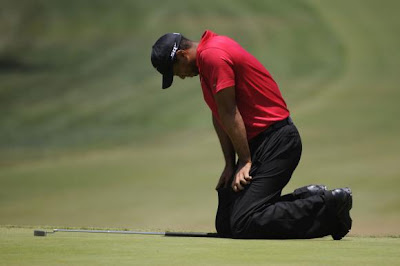 (This is from my Sports Blog)
“Hey, Mark, ‘sup?” said Tiger. “What’s going on. Thought we were having lunch.”

Tiger stood there. “This can’t be good. Talk to me Mark.”

“What?” His shoulders dropped. “Who are these people?”

They stood up. “It’s the only way,” said Mark. “Don’t worry, everything has been taken care of. Here, let me make the introductions. Mr. Nike, Mr Buick, Mr Gillette, and Mr. Electronic Arts.”

They stood, all shook hands with Tiger and sat back down.

Tiger sat facing the four, next to Mark, his agent.

Mr. Nike began. “Tiger, thanks for coming.” He glanced around. “Guess I’ll start. We are here for the millions of fans you have worldwide, so, well, we thought it was time. Golf has not been the same without you. Viewership is way down. It’s time you started playing again.”

“Everyday you’re not on that leader board,” said Mr Buick, “our return on investment suffers. That’s why we are here, Mr Woods.”

“A ghoulish man like Michael Vick has returned.” said Mr. Electronic Arts. “With him our cost per unit sold was way beyond our initial calculations. His presence on the field became mandatory. His prison time really cost us.”

“I thought a meeting like this would be good,” said Mark, touching Tiger’s arm. “So there will be no surprises.”

“Just so there’s no misunderstandings, Mr Woods,” said Mr Buick. “We have loans to pay, and shareholders to satisfy. We have money to make and it’s not happening with you in seclusion. We need you back winning tournaments.”

Tiger then noticed another man at the far end of the table. He was a large man, wearing a brown suit, tight around his muscular arms. He had a dark tattoo creeping out from under his collar. He sat quietly, picking at his thumbnail.

“Now,” said Mr Buick. “I haven’t checked closely, but with this layoff of yours, almost three months, I’m told it could be a violation of your contract with us. I don’t think you want your relationship with us to change, now do you?”

Tiger,” said Mr Gillette, raising his hand. “We’ve come up with a plan. It’s a good plan, that we can all live with. Solves all of our problems, nicely I think. A public apology.”

Tiger blinked. “I’m coming back, guys,” he said, “one of these days soon, but…not right now. I’m in rehab, so that’ll take time. Everything else is private between me and my wife Elin, and the kids. I’ll work this out on my own. No need for any…plan.”

“What?” said Tiger. He turned toward Mark. “Do these guys know who you’re talking to? I’m the one that’s out there doing all the work.” He looked back. “I’ve made you guys plenty. I’m the one…”

“Of course. I am liked by my fans.” said Tiger. He leaned over the table. “And I’ll do it my way. They don’t need to hear about my private life. No way. I’ll handle this.”

The large man in the brown suit sighed and looked at his watch.

“Others in the public eye have faced similar problems,” said Mr Electronic Arts. “Clinton, Kobe, Rush with his Oxycontin. They waited for a sufficient amount of time, publicly apologized, and moved on. That’s all we’re proposing.” He took papers from his briefcase and pushed then toward Tiger. “This is what you’re going to say.”

“Wait,” said Tiger. “This is between me and my family. I’ve done some crazy stuff, but it’s not going public.” He looked at the papers. ”I can’t…won’t do this. No. Not doing this. Sorry guys.”

There was silence. The large man in the brown suit cracked his knuckles.

“We know what’s important to you.” said Mr Gillette. “It’s all worked out. We will never talk about your past again. Today is a new day, Mr Woods. It’s in the speech. There’s no apologizing to women in your past, just your wife and family. You will say you’re sorry, and mean it, and…about the media. We don’t think you can concentrate on golf with paparazzi following you. We’ll handle them. It’s in our best interest.” He slapped the table. “All you have to do is read the speech…with conviction.”

“I hate giving speeches.” said Tiger. “I know you want me to come back, but, look, I don’t need this. It’ll be soon, okay. I have it all under control.” He stood up and pushed the papers back toward Mr Nike.

As he stood up, Mr Buick, said softly, “Sit down, Mr. Woods. We’re not finished.”

Tiger slowly sat back down.

“Your wife and children have been hounded by the media,” said Mr Buick. “Seems the Media can find your children, even your mother, at a moment’s notice…satellite navigation. Well, no telling who else can find them. They mean a lot to you don’t they, Mr Woods?”

“Just saying, if they can easily be found, who knows what danger they could be in, some night, when they least expect it. Accidents happen.”

The large man in the brown suit, looked over at Tiger. There was no smile in his black eyes.

“Otherwise,” said Mr Buick, “and I hate to say it, but you’ll never play in a sanctioned tournament again. Simple as that. Nobody wants that. Just read the speech, try to look honest, and we’ll go from there.” He pushed the papers back in front of Tiger.

Tiger took a deep breathe, looked out through the large windows, then down at the papers.

“That’s better, Mr. Woods.” said Mr Nike. “So, here’s how it’s going to be. You will read the speech, on TV. We’ll have you wait an appropriate amount of time, and then we’ll let you play again in the PGA. It’ll be just like it was. And, don’t worry, we’ll make sure you and your family are well protected.”

“Right thing to do for all concerned,” said Mark. “It’s a good thing, Tiger.”

“But, I’m the one who should be telling you people…”

“But your not, Mr Woods,” said Mr Gillette.

“Hey, we’re on your side in this,” said Mr Electronic Arts. “It’s all in the speech. Just practice it. Make if sound from the heart. We got a guy that’ll help you with that. We’re thinking next Friday. No more hookers, or whatever, will ever be spoken of again. You’re starting fresh. It’s a new Tiger Woods. And your fans will love you for it.”

As they left, Mark slapped Tiger on the back. “Okay. Now we’ll have lunch. Come, we’ll have a sandwich, drink a beer. Hey, in this world, you want to get along, you gotta go along. Come on, it’s all good.”

The large man in the brown suit watched as they left. He took out his cell phone, and dialed. “Boss, it’s me. No problem…”

That’s my take. What would you have Tiger do now?