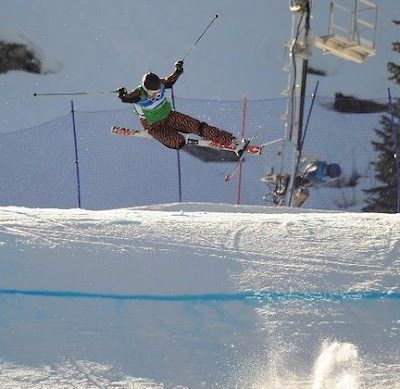 (This comes from my Sports Blog, Butterfield on Sports)

“You okay? Man what a crash.” He sat down on the bench next to his son. They were alone in the white tent next to the skicross course.

“I was going for it,” said Chris. “Just hit wrong.” He was crying. Blood dripped from his nose and from under his eye. “I had it, but went crazy on that jump, hit it too fast.” He took a deep breath. “I had it, Dad. I had it.”

He clenched his fists. “Right there at the end. Hit that last jump.” He looked around the tent. “Almost.”

His father waved toward his son’s face.

Chris touched his face, and saw the blood. “Crap, guess I hit face first. It’s my shoulder that hurts. Supposed to get it x-rayed. And maybe my ribs.”

“I saw you in the air, then you disappeared.” said the Father.” I saw it after on the TV.”

Chris mumbled to himself. “Hit that jump right I had it. Had the speed. Would’ve caught them both.”

A skier poked his head into the tent. “Chris, you okay?”

“Hey, Mike. Congratulation,” then to his dad, “Michael Schmid, guy who won.”

“Yeah, I saw.” The father smiled out at Schmid, waved his hand.

“Yeah,” said Chris. “You caught me right at the start. I was stuck in last most of the race, but I was gaining, had third until the fall.”

“Once you’re in front, it’s easy.” said Schmid. “You know that. A lot easier than being behind somebody.”

“You caught me right at the start.” said Chris.

“Go for the lead,” said Schmid. “All the way, I am thinking, Del Bosco is coming.” He pointed to Chris’s shoulder. “I saw on the TV. You okay?”

Schmid shook his head. “The way it is. Crazy this skicross.” He waved, “See ya. Good Luck.” and ducked back out of the tent.

“Yep” said Chris, looking at his Dad. “I had the bronze. I was getting faster, hit that last jump I’d have Gold. But….just missed.” He rubbed his ribs. “I was right there…hit it right, would have won…Had to try, right?” Without waiting for a reply, “Yes. I had to try.

His father touched Chris’s leg. “Can’t ask for more than that. You’re the best ski crosser I know.” They both smiled.

But his body hurt. He put his head down, the race still pounding in his head. Over and over.

He’s back sanding in the starting box.

Thanks Dad for being a Canadian. USA didn’t want me, they had to screen me for weed. But I’m here, and I’m ready. Just like practice. How many times have I skied this race? Get out in front. And don’t let anybody pass.

‘ATTENTION’ Okay, okay, okay…BZZZZZ. GO! Get the lead, get the lead. Oh boy, go GO. Damn, they got me. Okay, just be calm, calm. You’ll catch up, they’re not that far in front, fourth, last. Patience, just wait, okay pass NOW, on this turn, oops damn, I couldn’t, okay pass, on the jump, YES! Yes! YES! I’m THIRD, almost past them all, couldn’t. Wait, wait, wait for the jump. I’ve got third. Wait, and move to the right for the jump. You’ll take them both. Okay, moving, I’ll catch them all at the finish. I can do this, to the right, move over, now, speed, SPEED, and up, YES, oh, OH, OOOOHHHHH…

The cold air in my face, kick, you’re off balance, KICK! Oh boy, my stomach, the wind, the hard snow, bounce, MY SHOULDER, DAMN, and again, skidding, rolling, OUCH! Ribs. Snow in my face, my side. Cold. Very cold. Silence.

“Guess I hit face first,” said Chris. He rubbed his bloody nose on his sleeve. “I don’t know, you think I should have played it safe?” He looked down at his hands. “I had to try, Dad…I had to try.”

“You had third there for awhile.” The father stood up, found a pack of Kleenex, and brought it back.

Chris got up and messaged his ribs. “I’ll get checked up, my ribs hurt, then maybe we’ll finally celebrate…being an Olympian.” He ran his hands through his hair, and grimaced. “We’ll go to the medal ceremony, can’t miss that. Everybody will be celebrating. Hell, I gave it my all. DAMN! Everybody’ll be asking how it feels to crash. They always do.”

“You’re going to be all right there?” asked the Father.

“Sure, I can’t miss that. It’s part of the ‘Experience.’ Take pictures, you and Mom.”

“They’ll all be partying. Might be champagne. How’s your neck. Does it feel okay?”

Chris looked down at his Dad. He slowly nodded. He knew. “Necks fine, Dad. It’s my shoulder and ribs this time.”

Yes, he knew what his father meant. Six years earlier he had been dragged out of a river near Truckee, passed out drunk, almost dead, his neck broken. He decided, after that and a third DUI, it would be one day at a time. Sober now for three years.

“DAD! Come on. I didn’t get a medal. But I’m okay with it. Little banged up. I was right there. Get past two guys and it would have been Gold. I know I’m as good as they are.”

Chris rubbed his shoulder. “It’s okay Dad. I wasn’t acting crazy. One jump. Hit it right and I got the Gold. I was…almost.. there. Almost.”

His father nodded. A man in a white coat came over and took Chris to the portable x-ray machines. “Be right back. Hell, who wants Bronze. I was going for Gold.”

But his father thought he could still see tears in Chris’s eyes.

That’s my take. What do you think, Bronze good enough in the Olympics?