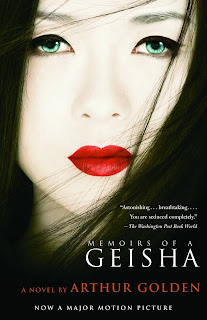 Speaking frankly, I bought this book because of the catchy cover. They say in America ‘Don’t judge a book by the cover’. But that is exactly what I did. I felt when the cover looks so exotic; the book must be worth a try and Lo! I landed up with one of the best books I will ever read in my life.
Memoirs of a Geisha, Is more of an autobiography of a small girl Chiyu, who by fate has been sold to Gion (more of a prostitute house) along with her sister and then begins her turbulent journey to become one of the most cherished Geisha of all times – Nitta Sayuri San. The book is very intelligently written and once started you wouldn’t rest it till you finish the last page.
On one hand, the author Arthur Golden tries to explain Japan during the world war II as seen by the eyes of a small girl and the transformations it goes through her life period. On the other hand he very intricately explains the feelings of the girl towards her sister, Satsu; her delicate animosity filled relationship with Mameha, her love for the chairman and her confused relationship with Nobu, who wishes to be her danna. The book further goes on to explain the difficult times of world war and how she braved them with the help of the chairman, her guardian angel.
It is Japan like never before.
My Kudos to the author Arthur Golden, who despite being an American has explained Japan and Japanese culture in such mesmerizing words.
My Suggestion, at the very immediate opportunity, go grab this book and get started.