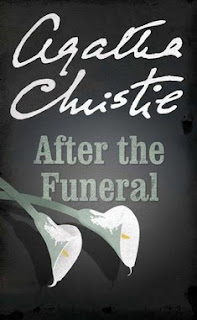 Q)What happens when a rich man dies with no proper heir to his property?
A) Bequeathing of property and some crime associated with it.
Think of it and at least a dozen bollywood movies and few Hollywood movies flash in front of your eyes. This is my first Agatha Christie Novel and above description is exactly what I went through after learning about the plot- Hollywood bollywood movies flashing away. But then I was in for a surprise.This book was written even before the ideas of these movies had had their inception in the minds of the people who made the movies.
Agatha Christie takes this posthumous family drama plot of rich man and brews a wonderful crime story around it. The characterization of the family, their relationship with the dead man, their appearances and their nature has been very well sketched in the book.
It all begins with a comment made by Aunt Cora at Uncle Richard Abernethie’s funeral. Richard has no heir to his property and thus everyone in relation wants to stake his/her claim. Aunt Cora comments that her brother Richard was murdered for his property. No one gives second thoughts to her comments as she has the fame of being demented. But things stir when she is murdered with Hatchet.
It is now that our gentlemanly and chivalrous Hercule M. Poirot is involved in the case. The book has some interesting top notch twists and turns and as one of my friend has put it “And really, After the Funeral is a mystery that latches onto you a few paragraphs in from the first page. Latches on and refuses to let go.”
You will find yourself immersed in the book and will enjoy reading it. Although Agatha Christie has her usual biases in selecting the murderer and sometimes she goes very detail in the descriptive, the plot and the end of the trail make up for it. But then, that’s the style of Agatha Christie right? So if you love her writes and if you love detective stories, you definitely don’t want to miss this one.