Yesterday I completed reading a book, it was a superb book, a must read. Name of that book is ‘The Kite Runner’, its written by Khaled Hosseini. So today’s post will let you know about that book. Hope you will enjoy it . . . 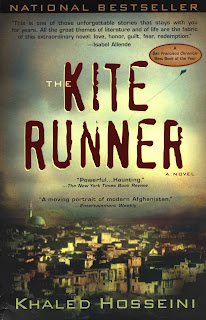 Taking us from Afghanistan in the final days of the monarchy to the present, The Kite Runner is the unforgettable, beautifully told story of the friendship between two boys growing up in Kabul. Raised in the same household and sharing the same wet nurse, Amir and Hassan nonetheless grow up in different worlds: Amir is the son of a prominent and wealthy man, while Hassan, the son of Amir’s father’s servant, is a Hazara, member of a shunned ethnic minority. Their intertwined lives, and their fates, reflect the eventual tragedy of the world around them. When the Soviets invade and Amir and his father flee the country for a new life in California, Amir thinks that he has escaped his past. And yet he cannot leave the memory of Hassan behind him.

The Kite Runner is a novel about friendship, betrayal, and the price of loyalty. It is about the bonds between fathers and sons, and the power of their lies. Written against a history that has not been told in fiction before, The Kite Runnerdescribes the rich culture and beauty of a land in the process of being destroyed. But with the devastation, Khaled Hosseini also gives us hope: through the novel’s faith in the power of reading and storytelling, and in the possibilities he shows for redemption.

“An astounding and humbling story of corruption, guilt and redemption. Epic in scope and intimate in its emotions, this terrific novel opens a window into a devastated country and takes us deep into the hearts and minds of those pierced by violence.”
– Atlanta Journal-Constitution

“Stunning…a complete work of literature that succeeds in exploring the culture of a previously obscure nation that has become a pivot point in the global politics of the new millennium.”
– Publishers Weekly (starred review)

“Like Gone with the Wind, this extraordinary first novel locates the personal struggles of everyday people in the terrible sweep of history.”
– People

“Poignant…The Kite Runner offers a moving portrait of modern Afghanistan, from its pre-Russian-invasion glory days through the terrible reign of the Taliban.”
– Entertainment Weekly (Grade: A)

“This powerful first novel, by an Afghan physician now living in California, tells a story of fierce cruelty and fierce yet redeeming love…In The Kite Runner, Khaled Hosseini gives us a vivid and engaging story that reminds us how long his people have been struggling to triumph over the forces of violence – forces that continue to threaten them even today.”
– New York Times Book Review

“From the first lines of The Kite Runner, Khaled Hosseini shows how an engaging novel begins – with simple, exquisite writing that compels the reader to turn the page. But The Kite Runner, Hosseini’s first novel, is more than just good writing. It is also a wonderfully conjured story that offers a glimpse into an Afghanistan most Americans have never seen, and depicts a side of humanity rarely revealed.”
– The Philadelphia Inquirer

“Here’s a real find: a striking debut from an Afghan now living in the U.S. His passionate story of betrayal and redemption is framed by Afghanistan’s tragic recent past…Irresistible.”
– Kirkus Reviews (starred review)

“A powerful book…no frills, no nonsense, just hard, spare prose…an intimate account of family and friendship, betrayal and salvation that requires no atlas or translation to engage and enlighten us. Parts of The Kite Runner are raw and excruciating to read, yet the book in its entirety is lovingly written.”
– The Washington Post Book World