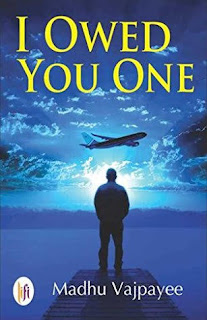 Dev Khanna has it all before a mysterious letter shakes the very foundation he has built his life on. With his beliefs challenged, he decides to close the chapter once and for all. I Owed You One is the story of promises and commitments, of triumphs and defeat, and of holding on and letting go.

I Owed You One is the story of Dev Khanna and his journey.

Dev Khanna was born into an affluent family in India that was able to give him a good start to his life. He completed his education, found a job, moved abroad, met a girl, fell in love and got married. With Radhika by his side, he was living a good life when a letter from back home changes everything. It brings back some sordid details of his past and makes him face the debt owes.

It is really difficult to say anything else about the plot without giving out some spoilers. But yes, there is lots of drama in the plot to keep the readers hooked. The author’s narrative style for this book really compliments the plot. The narrative style also helps in providing the readers with useful information just when it is needed and in a way that doesn’t overburden the readers at any point of time. The selling point of the book is its characters and the different dynamics between them. Through Dev, the author has portrayed the effects of the relationship dynamics between parents and a child and also how the dynamics between the parents can also influence a child. It was interesting and insightful. Dev, as the protagonist, is an interesting character. I wouldn’t say that he is perfect, yet he seems to be near perfect. His idealism, his quirks can both be endearing and irksome.

Having read the author’s debut novel, Seeking Redemption before this, I can certainly say that the Madhu Vajpayee has grown as an author. I also admire the fact that the author makes it a point to include some major social issues in her books to spread awareness.
However, I do feel that the book needed to be on an editor’s table for bit longer. Certain mistakes made it difficult to keep the pace of the reading.