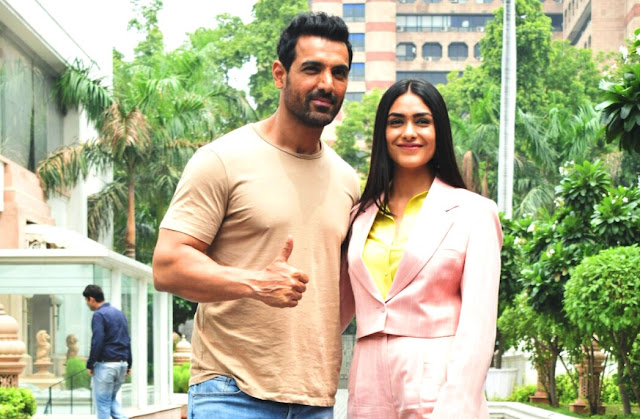 The press conference of upcoming action thriller Batla House was held at The Imperial Hotel, Delhi. Director Nikhil Advani and producers Bhushan Kumar, Monisha Advani, Madhu Bhojwani and Sandeep Leyzell were also present at the event.
The movie is inspired by the Operation Batla House that took place in 2008. It stars John Abraham and Mrunal Thakur in prominent roles. It is set to be released on the occasion of Independence Day i.e. 15 August.
Coming from the defense family background Mrunal expressed her happiness of doing this movie,” The sole reason for doing Batla house is my family background. When a police officer leaves for his duty, he doesn’t know that he shall not return back home or not. This kind of bravery gives goosebumps. Also, the role which I am playing is not only of a wife but also of a journalist which attracted me more towards this role.”
John spoke about the subject of the movie and his preparation for the role, “After the Batla House incident many debates were held between politicians and Human Right activists. But my work was to meet real-life character i.e. Sanjeev Kumar Yadav that he has gone through during that time because so that I can justify the role. I love my country and therefore I  love people who work for the country. I feel happy to bring out one such  story in front of a huge audience.”
Readers, please feel free to share your opinion by leaving your comments. As always your valuable thoughts are highly appreciated!
Previous Post: Fast & Furious Presents: Hobbs & Shaw: Review
Complete List of Reviews
http://feeds.feedburner.com/APotpourriOfVestiges