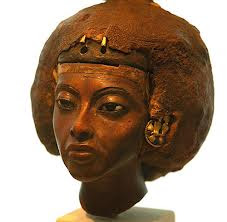 It was a dazzling moment in Egypt’s history when Akhenaten ordered the worship of a single deity – the Aten, or Disc of the Sun. but the old gods took revenge through his successors, who buried the heart of his city beneath a sea of cement. The religion of ancient Egypt embraced a pageant of human and half-human deities, from Isis, the horned goddess, and Osiris, lord of the dead, to hawk-faced Horus, and Thoth, god of intelligence, depicted with the beak of an ibis. Scores of lesser divinities were also worshipped – snake-gods, cat-gods, jackal-gods – in a long tradition derived from ancient cults. Their worship bonded Egyptian society for thousands of years. During the reign of Amenhotep IV (1379-1362 BC) the pantheon was swept aside. The pharaoh ordered that only one god was to be worshipped: the Sun, or more properly, the Aten (‘Disc of the Sun’). The new monotheistic religion was revolutionary, exalting universal harmony, the beauty of nature, and love among all mankind – and represented nothing less than a cultural revolution. 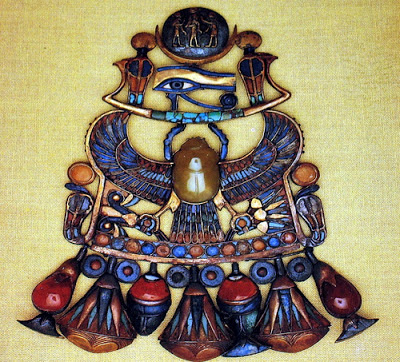 When the renegade pharaoh mounted the throne, Egypt was at the height of its power. Since the founding of the18th dynasty in 1570 BC – the beginning of the era known as the New Kingdom – Egyptian wealth and might had grown immeasurably. The nation ruled the largest empire the world had yet seen, encompassing Upper and Lower Egypt and the greater part of Nubia, beyond the fourth cataract of the Nile to the south. The empire received tributes from subject kingdoms, and Thebes, the capital, become a city of fabulous riches. Much of the wealth reached the priests of the capital’s main deity, Amun – ‘The Hidden One’. The figure of Amun encompassed many divinities, most notably Ra (the Sun), and the gods of war and conquest. His cult was Egypt’s official religion, and his Temple of Karnak at Thebes becomes one of the biggest religious complexes ever built. The priests of Amun wielded immense power – enough to threaten the throne.

By the time of Amerhotep III, decadence was beginning to taint Egyptian society. The empire’s frontiers seemed secure, and warlike skills were neglected. Art had become more mannered, and the religious monopoly of Amun was breaking down. Amid the wealth and splendour of the civilization, a feeling of disquiet pervaded. The name of Aten, Disc of the Sun, first appeared on some monuments as another title for the Sun god, Ra. The cult may have been given royal sponsorship in an attempt to break the powerful grip of the established priesthood on Egypt’s political lift. It was in this setting that the drama of Akhenaten unfolded – a drama which was to shake Egyptian society to its roots. 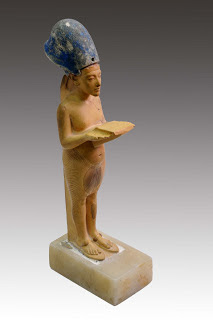 Amenhotep IV came to the throne in 1379 BC surrounded by all the usual pomp and ceremony of the established cult of Amun – even the name Amenhotep means ‘Amun is content’. But the new pharaoh had a particular zeal for Sun worship. Amenhotep began installing monuments dedicated to Aten in the Temple of Amun at Karnak. This must have stirred a whirlwind of fury among the established priesthood. As the pharaoh’s religious ardour increased, he began closing he temples of Amun and persecuting the priests. The name of the god was obliterated from monuments throughout the country, and Amenhotep decided to take a new name, Akhenaten, ‘He who is pleasing to Aten’.

It was not only the cult of Amun which was disbanded; those of the other ancient deities – Isis and Osiris, Horus and Thoth – were swept away, too. At the expense of a company of gods who had coexisted since the dawn of Egyptian civilization, Akhenaten imposed monotheism: the belief in a single, universal deity. He dismantled an entire universe, leaving the vulnerable Egyptians protected only by the blank gaze of a celestial disc.

The strength of the pharaoh’s religious beliefs suggests some kind of personal revelation. A great hymn surviving from the period, which may have been composed by Akhenatem, reveals a fresh and sparkling vision of the world. It is a paean to the supreme life force, the Sun, and names Akhenaten as the son of the solar divinity – the sole intermediary between mankind and the divine:

‘You arise in beauty in the horizon of the sky, oh living Aten, creator of life… Earth lights up when you appear on the horizon, Aten who shines throughout the day. ‘You chase the darkness and bless us with your rays. The two countries (Upper and Lower Egypt) rejoice. The people awaken, they stand upright. ‘It is you who have caused them to raise… trees and plants grow green. The birds fly from their nests, praising your spirit with their wings. All creatures leap in frolic… ‘No one knows you but your son Neferkheperure Waenre (another name for Akhenaten). You have informed him of your ways and of your power.’