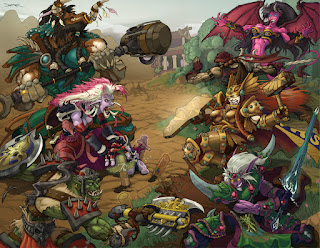 Image source : here
Loading...
NightQueen wandered through the plains of Sholazar. She and her allies were looking for some Hyldnir to kill.
Night Queen was a level 79 Blood-elf Mage (spell-caster) along with her allies consisting of hunters (ranged weaponry and beast taming), druids (metamorphosis) and rogues (Stealth and melee). She was on the verge of her last quest to level up and become a fully-fledged level 80 Mage which unlocks a plethora of spells and attacks.
The entire faction followed NightQueen because of her decision making and because of the fact that she could easily kick each of their butts in combat with ease.
NightQueen led her faction into the Brunnhildar Village where the Hyldnirs were found in abundance. As they progressed into the village, as surreptitiously as they can, they spotted a Hyldnir oblivious to their arrival. Quick as she was, NightQueen spotted two others, not far away. But sadly, the same could not be said about other members of her clique.
Before she could communicate with the others, one of them, a druid called BlackHand, whose powers include transformation, quickly altered into a bear and launched an all-out attack on the unwary Hyldnir.


This post is written as part of IndiFiction Writing Workshop based on the plot given by The Fool.
Original link