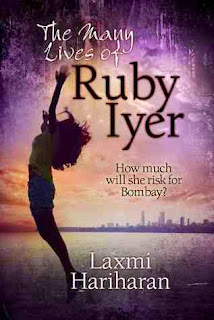 Book Title: The Many lives of Ruby Iyer
Author: Laxmi Hariharan
Genres: Fiction
Rating: 3
A YA action-thriller, with strong dystopian undertones and a kickass protagonist, taking you on a white knuckle ride through a disintegrating Bombay City.
When her best friend is kidnapped, Ruby will stop at nothing to rescue him.

Criminals run the streets of Bombay. Jam-packed with the worst degenerates. The city is a shell of the pride and joy it used to be.

Ruby knows something must be done, but it isn’t until her best friend is kidnapped by the despotic Dr. Braganza that she knows that she and she alone must save city, save her best friend, save the world from total destruction.

Armed only with with Vikram, a cop-turned-rogue they are about to embark on a road they may never return from.

If you’re looking for fast-paced books like Hunger Games or dystopia fiction like Angelfall, the Ruby Iyer series is perfect for you.

The many lives of Ruby Iyer is a Young Adult thriller about a headstrong teenager desperate to rescue her friend thus uncovering the plot behind a falling city. She gets groped, pushed to death, transformed, manipulated and drawn into circumstances. Readinf through the first few chapers, the more she wanted to stay strong just for the heck of it and the more she tried to suppress her physical and emotional weariness, there was one thing I wanted to do. Give her a tight slap! Annoyingly, she is the protagonist and am right there, inside her head. I had to contain myself and get used to her. But as I completed the book and put it aside, it occurred to me that the way I felt about Ruby was indeed the Author’s brilliance! I mean, to think of it, a girl on the cusp of teenage and adulthood from a dysfunctional family, fending for herself in a melting pot called Bombay, how else would you expect her to react?!

I enjoyed the trivia (as much as Ruby did :)) all over the book like the Litchenberg figure, Unique heartbeats, the Seven Island(well, am bad in history), the marital alliance between Englnd and Portugal(Did you know that Catherine Braganza,incidentally, didn’t have a heir?). Ruby’s Ma making appearences through Ruby’s conscience is a nice subtlety though it killed a potential suspense.

All that said, I beg to differ about the praises(by other reviewers) on the Author’s writing style. Though I appreciate the difference between ‘She was angry’ vs ‘her breath was uneven as she clenched her fists’,  I felt the Author has marginally overdone it.  The detailed narration was so overwhelming that it slowed down my reading.
Recommendation: Go ahead but only after you finish that bestseller at hand!

Buy this book from…
Original link