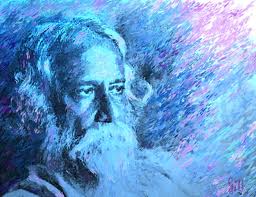 To write about a person about whom everything good has already been written is not exactly my cup of tea. I, undeniably, get influenced by all those good view points and do not seem to add anything new to the already welled up ocean. But when the ocean is as big as Tagore, every individual bubble sparkles distinctly, refracting lights of greatness coming from deep inside and converging ethereally to illumine the outside world. For such a person whose works are repositories of every human emotion possible and much beyond, expressing the significance and wholesomeness of Tagore with my frugal and blunt tool of words is a travesty. I would rather take recourse to plain recollection, of three seemingly ordinary yet unforgettable incidents in my life till now, which I deem appropriate to put forward in order to commemorate his birthday today, and to pay my humble respects.
(a)   The cool spring morning, 2000:
I was only twelve years old then. My school had given an extra holiday which preceded the festival of colours. As for Tagore, I had been only formally introduced to him till then, as a poet who writes poems which are given much importance in exams and are quite difficult to understand. Needless to say, I did not have a favourable opinion of him and ignored my grandfather’s sneers when I showed more inclination towards listening to Sonu Nigam instead of Debabrata Biswas.
On that morning, when I was sitting on the sofa after my breakfast and was getting ready to hear from my mother how I was getting lazier every day when it came to completing studies on time, I saw my grandfather go slowly to the room where the gramophone was kept. After almost 5 minutes of a habitual whirring, it started playing “Mor bhabonarey ki haway”. Though I would have preferred a Mohd. Rafi cassette anytime over Tagore back then, this song was somehow unusually overpowering. Even though it was expressing happiness in alternating low and high notes, the profoundness of Debabrata’s voice elicited a different degree of power. And yet how delicate, how delightful it was, and how it pervaded!  It was a song of unstifled mirth, the waves of which stirred throughout the body, beginning from the soles of the feet. The description of the bright blue sky and the wild scent of spring would be superfluous here; the song itself is more than enough.
Mor bhabonarey ki haoay- Debabrata Biswas
Happiness had never been so commanding before. I confess to have switched loyalties from that day onwards.
(b)  The terrible Physics Exam, 2004:
Board exams are always tough, especially when thunderclaps plan to make merry on a disturbing afternoon swarmed by unknown questions and confusing answers to the known ones. Those were days when the Xth standard exams were not made optional, instead a tortuous pathway to even higher studies. And when your ship is sinking ignoring the laws of floatation in the physics exam with thunder rumbling outside, you feel like a defenseless soldier at the mercy of the rough blows.
I came back home devastated, neither knowing, nor even wanting to know the possibly dreadful outcome of the previously happened massacre. While speculations in the house extrapolated the ramifications and equated them with a bleak future, I chose to turn my tape recorder on to drown the disappointments. Yes, gramophone had become fully obsolete by then.
This time Debabrata did not distil drops of happiness excessively and vociferously like before, instead a soothing glow of contentment came from within as I listened to “Aji Hridoy Aamar”. The languid rhythm of the song and yet the blithe promenading of the heart in the land of clouds searching for the unknown, as the lyrics suggest, was the perfect antidote to the vicissitudes of exam days. I closed my eyes and listened again.
Aji Hridoy Aamar- Debabrata Biswas
Fortunately, I did well in the Chemistry exam the next day.
(c)    The last conversation and goose bumps, 2009:
By this time even audio cassettes had become out dated. CD players were more of a sensation, so were affordable laptops. Attuned to the changes of the world, I had travelled with one to my grandfather’s in my winter recesses. By that time, age had taken it’s toll and it was quite difficult to put things across him. It was not an easy task to trace out his feelings and responses and to observe and define them was similar to reconstructing a fortress from a view of it’s grey and broken ruins. But on that wintry afternoon when he asked me to play “Probhu Aamar Priyo Aamar“, it was unmistakably clear. I turned on my speakers to full volume in the hope of him receiving at least a fraction of it. It was Debabrata again.
I saw a light flicker in his eyes accompanied by a faint smile. That’s it. The rest of our conversation remained silent except for that one flicker. This communication with the person I respected the most coupled with a voice dripping with graveness left me bereft of any verbal subtleties.
Probhu Aamar, Priyo Aamar- Debabrata Biswas
My grandfather passed away two months later.
**********************************************************************

P.S.: Today, believing myself to be an invaluable instrument of the invisible hand of justice, I  bunked half of my office hours and listened to “Ei to bhalo legecchilo” and many more. And once again, I lived a little bit more.
Thank you, for being there.
Original link