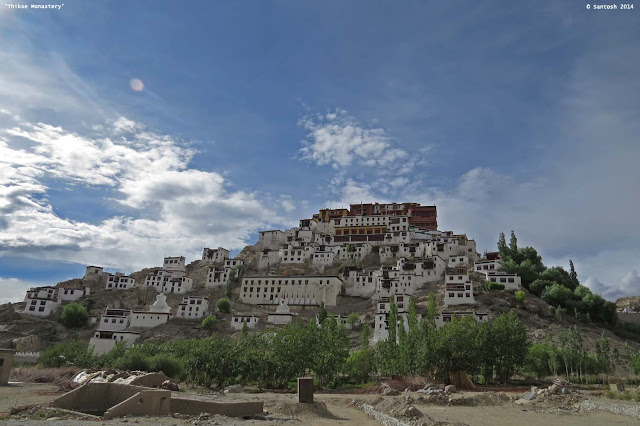 We took a day off after arriving in Leh, a little tired of the long travel done so far and we used the day to acclimatize and look around Leh and we also had to get the vehicle checked. Thikse monastery was the only place we visited in Leh and we couldn’t manage any other sightseeing. Next day would be a big day as we would be traversing through Khardung La. We also utilized the spare day to do some shopping, pick up essentials, fill up the vehicle tank and get the permits (just in case if it is required somewhere). 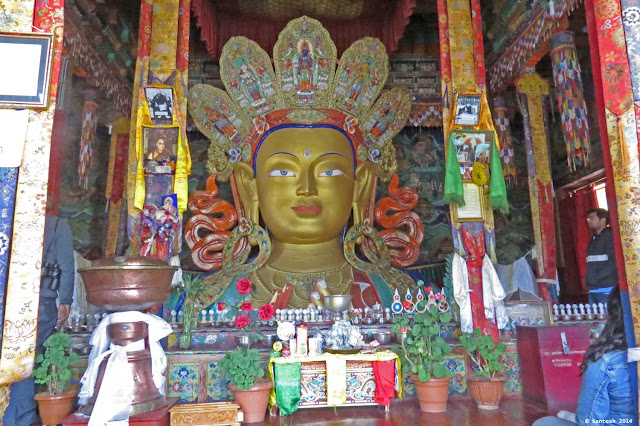 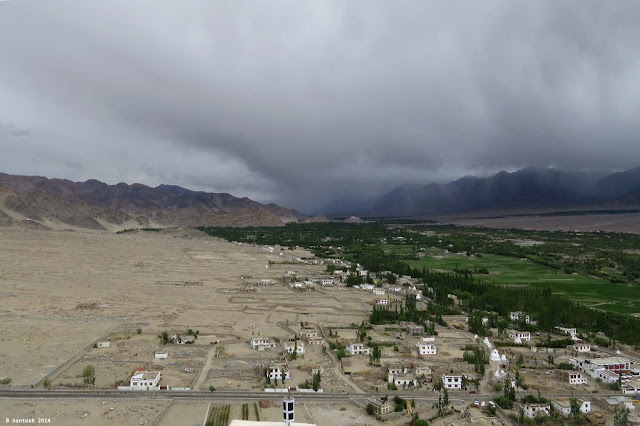 Next day, we were up early and all set to traverse through the highest motorable road in the world situated at an altitude of 18380 feet! Our plan was to reach Panamik from Leh passing through North Pulu, Khardung La and South Pulu. 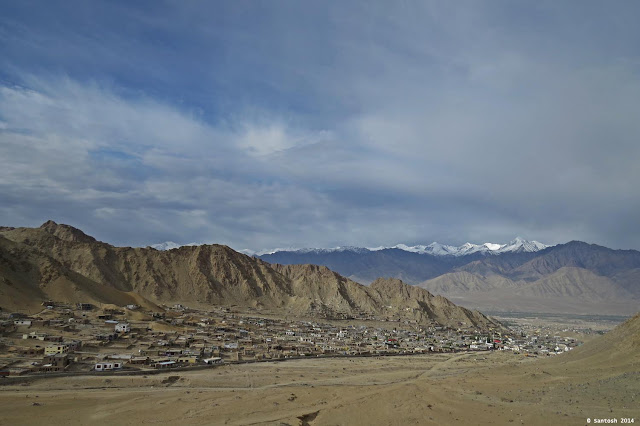 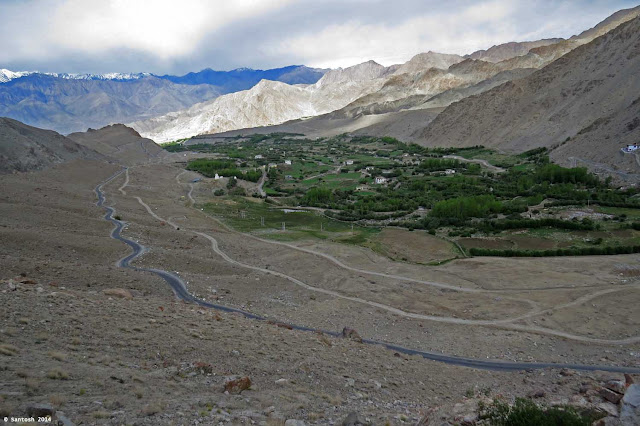 Khardung La is a hotspot for tourists, especially bikers who ride in all kinds of bikes (bullets more in numbers); stay on the top for a while and either proceed back or halt at Panamik. High altitude has its problems and for people not used to heights, precaution needs to be taken else you could easily be affected by the High Altitude Sickness that in extreme severity can lead to death.

As we left Leh, the roads started winding up gaining altitude and we could see wonderful vistas of the Leh town with the mighty Himalayas in the background. All these hilly terrain roads are maintained by the BRO (Border Roads Organization) and they have people and equipment at strategic locations that is called in whenever required. Also to note, all these are strategically important locations as our neighbors are just across the mountains and the roads need to be kept clear if any immediate troop movement needs to happen. 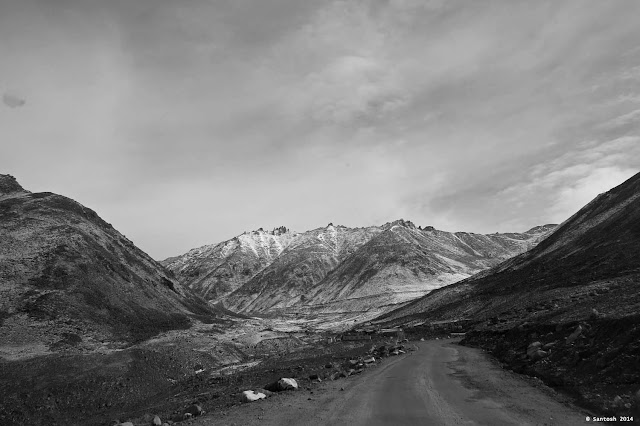 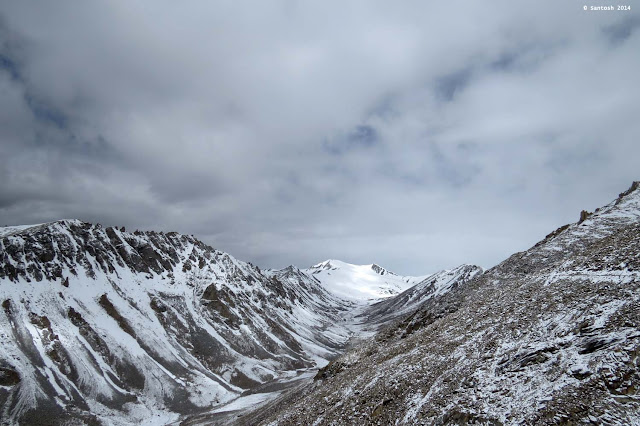 Driving up to Khardung La is an experience in itself and the vistas you see blow your mind away. For a person like me, who had never experienced a snowfall or a hailstorm; this trip made me experience all the above and we also had to literally drive on ice-slush kind of tarmac in some places that was quite challenging as well as scary.
Khardung La top sometimes resemble a mini market (of one of our cities) with people coming in hordes (picnickers in my language) and there is not a place there where you don’t see a person taking a selfie or a groupie. A small eatery on top offers the much required snacks and a bowl of Maggie if you are really hungry. Yes, Maggie has been a lifeline for people living in such hostile conditions and also travelers visiting them as it’s the quickest and easiest to prepare and it provides you the much needed energy to withstand the cold and fill up your stomach. 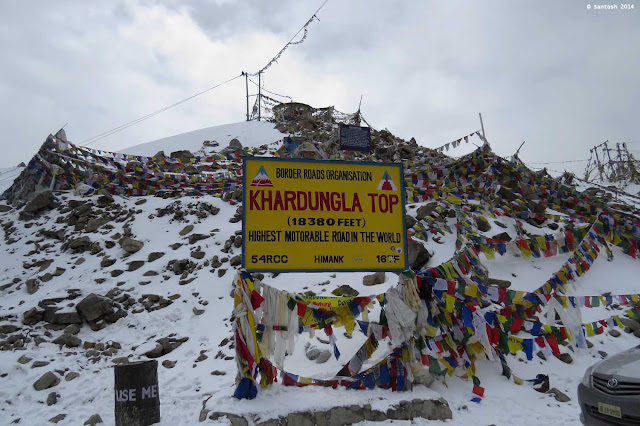 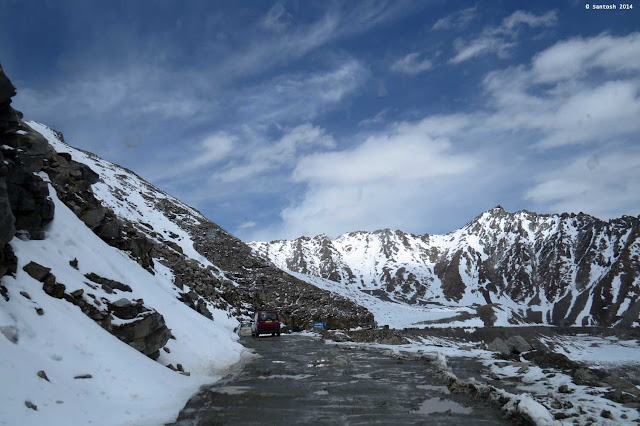 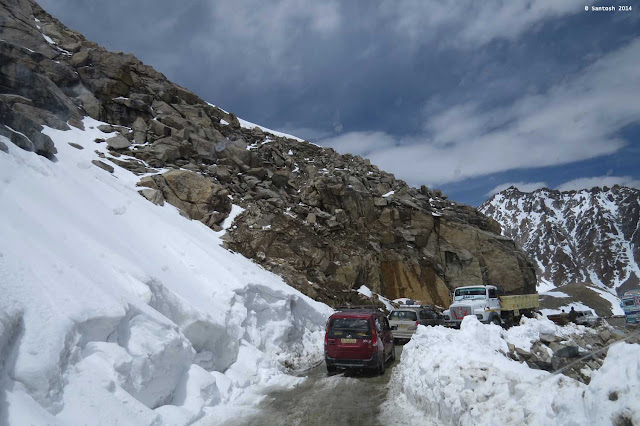 We did not directly drive to the top, but took it easy stopping en-route for our customary birding and slowly drove up. We found more birds scavenging on the litter discarded on the top and we could see them feeding on Maggi from a plastic sachet at 18380 feet. Plastic is strewn from the sea depths to the highest mountain tops! After our birding, we had some quick hot Maggie followed by a cup of hot tea to keep us warm and active. Temperatures atop Khardung La is usually in the single digit or in the negative and any individual needs to be prepared for the harsh weather up there. We recorded temperature of -1degC atop Khardung La, the lowest on our entire trip. 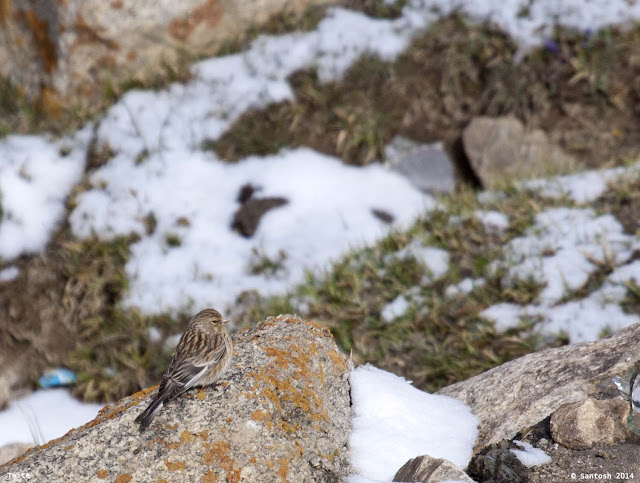 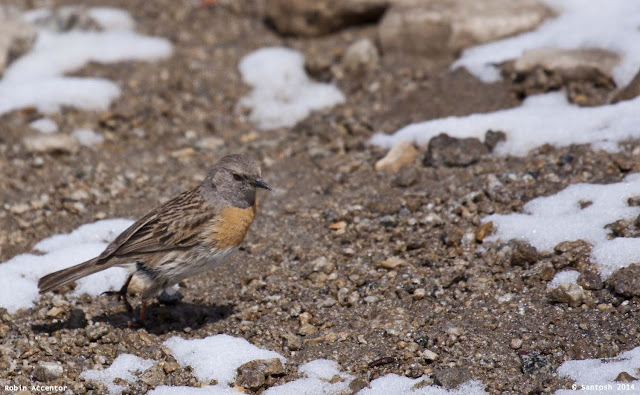 Note of Caution: Passing/Driving through high altitude mountain passes is an adventure in itself but one needs to take some precautions before venturing out on the same. Normal human beings get affected by the sudden altitude change and drop in Oxygen levels and it becomes harder to breathe and move around. It is advised not to ‘overstay’ atop Khardung La for more than 20-30 minutes as Oxygen levels are low and it can affect an individual’s health. But, we the ignorant people tend not to follow the advisory and end up suffering. We could see quite a few people visiting the mobile army hospital atop Khardung La for a rest and in some cases for some Oxygen intake. Knowing the risks, we were well prepared and informed and acted accordingly. Also advised is to intake lots of water to keep your body hydrated in the cold weather. 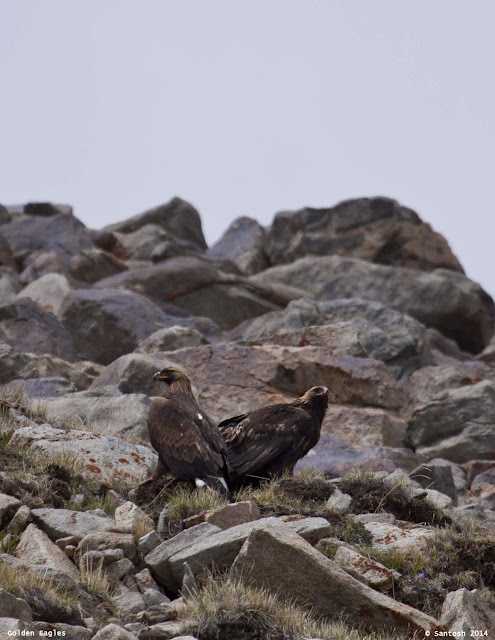 Coming back, how does it feel to be atop the world’s highest motorable road where only a select few visit and as a bounty, we were also treated to some wonderful bird sightings along the way! Finches, Redstarts, Wooly Hares, Bharals were some of the sightings we had along the way. Soon, not to overstay we descended down towards South Pulu on our way to Panamik and a bounty sighting awaited us as we located a Golden Eagle majestically perched atop a rock cliff just beside the busy road. Soon, we realized there were more and finally saw 4 of them together… they were having a feast and we were enjoying the siesta! Amith and PK had a far off sighting of this majestic raptor with difficulty in the Spiti valley and here we were watching 4 of them together and that’s what we call luck. 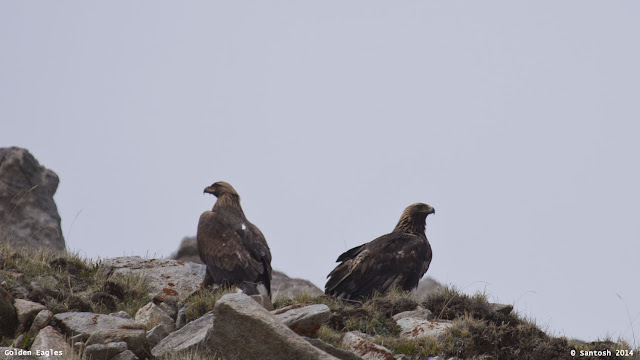 The road through Khardung La that further passes through Panamik is a strategically important route as it further leads to Siachen (the dispute area with China) that is a very important post for our armed forces and regular troop movements happen along this route. Interestingly, many vehicles (trucks, bikers, cars) that get stuck in the ice-slush or have a breakdown are mostly rescued/helped by the army personnel moving in their heavy trucks. 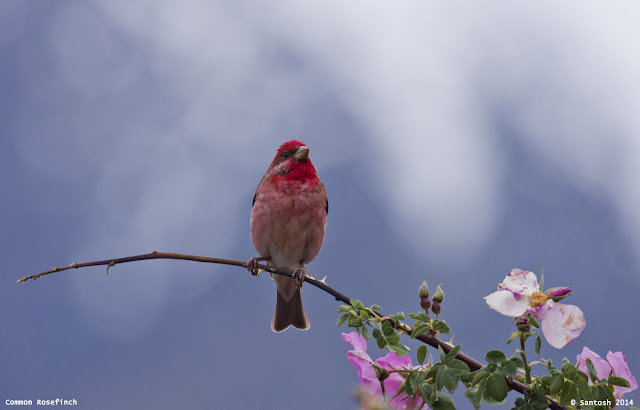 As the roads were brilliant, we reached Panamik quicker than expected sighting a herd of Bacterian camels far off in the horizon on the way and at Panamik we started scanning the area for a single bird that we had come in search of. Well, yes we had come to Panamik just to see that one single tiny little bird. Amith and Kannan got fleeting views of the bird before we called off for the day sprinkling hopes for a better sighting the next day. For our stay at Panamik, we walked into a no-name not-yet-completed building looking for accommodation and we got it but on the flip side there was no electricity in the guesthouse. Huber lodge was the name of the place and we caught up with two expat bikers who had come riding from Manali. 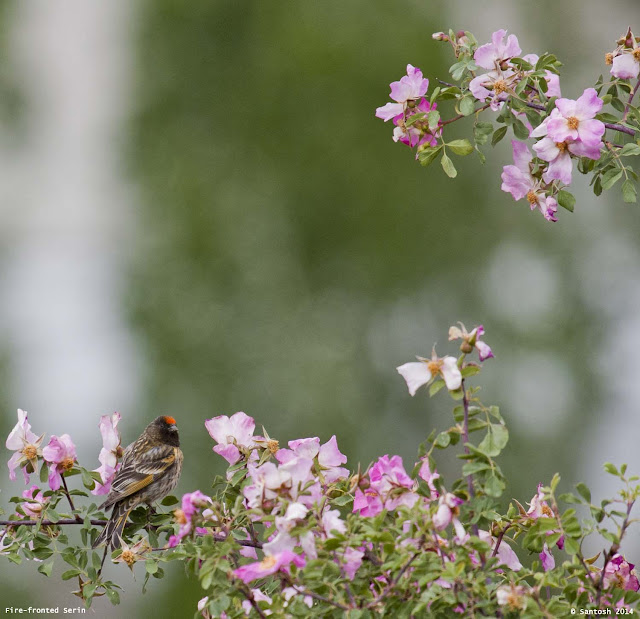 Soon, next morning we were up early and out scanning the area looking for that small bird that goes by the name White-browed Tit Warbler that is just about 10cms in size. This small little bird, belonging to the warbler family is generally skittish in nature like other warblers and is constantly on the move and catching a clear sight of them is difficult. This individual kept us on our toes and gave us glimpses only for seconds while on the move. 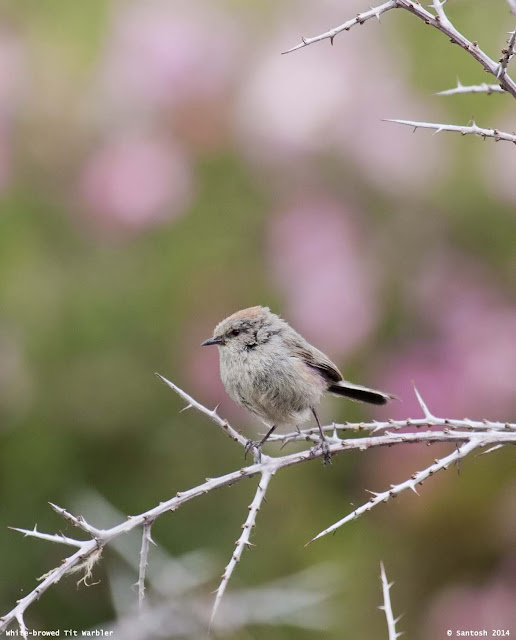 With our mission accomplished, the rest of the group went on to visit the famed hot springs of Panamik while I stayed back to catch up on some sleep. On our return journey, we were to pass through Khardung La pass again birding along the way and also gave a lift to a Buddhist monk, who incidentally resides at the Tibetan camp near Kushalanagara in Karnataka. Our hopes of an early return were squashed as we got to know that Khardung La stretch was closed due to fresh snowfall and they were not sure when that would be cleared. We were advised to rest for the day and continue in the morning. After waiting for an hour, we scouted for options to stay at South Pulu and we found it but somehow were not convinced with what was on offer and the price quoted. 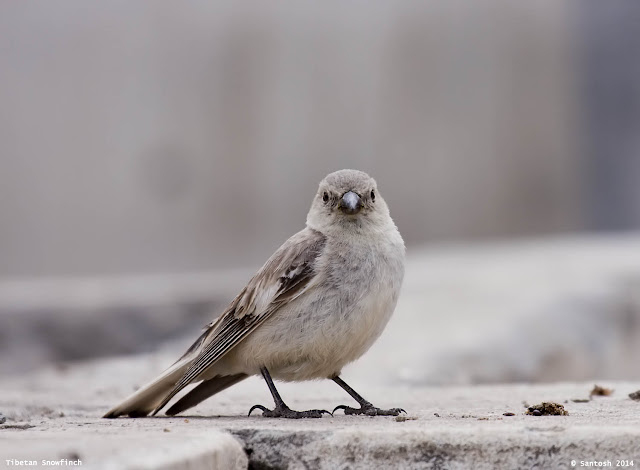 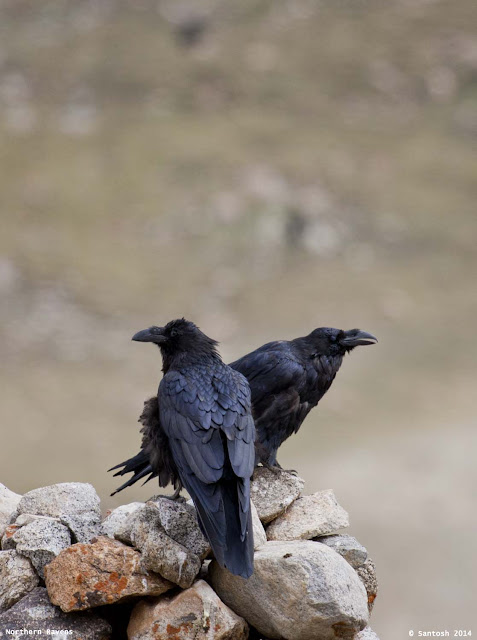 Dilly dallying, we pursued one last attempt to check if the roads were cleared and proceeded towards the check post as we still had an hour to go for daylight to vanish. The person in charge replied in the affirmative that yes the path was cleared for light vehicles to pass through and three other cars that were lined up along with us were clubbed and told to travel as a convoy staying together. We jumped at the offer and started our travel towards Leh. We soon realized why the stretch was closed and in some places there was no signs of the road at all. The weather was worse than the previous day and was showing no signs of improvement and Khardung La looked deserted with hardly few vehicles up there owing to the bad weather. Some moments were scary, but we were cautious and passed through eventually in dimming light. Rosefinches, Snowfinches, Redstarts, Chukar Partridges, Punjab Ravens, Golden Eagles and the mighty Lammergier were some of our sightings all through the day. Back at Leh, we stayed at the same lodge, Hotel Dorjee and hit our beds for some good rest as we were to visit one of the most beautiful high altitude lakes, Pangong Tso, the next day…