Rape…as defined by WHO in 2002 -“a physically forced or otherwise coerced penetration-even if slight-of the vulva or anus,using a penis,other body parts or an object”.
But what i feel it is not the proper definition since it doesn’t signifies the pain and misery a woman suffers during and even after the incidence.
It doesn’t signifies the emotional and psychological trauma the victim faces,it doesn’t signifies the problems faced by the victim from the society.As it is observed by retired Justice of Supreme Court Arjit Pasayat-“while a murderer destroys the physical frame of the victim,a rapist degrades and defiles the soul of helpless female.”Clearly,it is not something which can be defined in a framework of few English words.
“WE ARE A DEVELOPING NATION”….yes we are a developing nation.According to the federal Home Ministry’s National Crime Records Bureau(NCRB) states that every 30 minutes an Indian woman is raped.According to 2010 statistics of NCRB rape is the fastest growing crime…since 1971 when cases of rapes were officially been recorded ‘the NCRB has recorded an increase of 678% in the crime.
(For a full repot you can visit to NCRB website which is ncrb.nic.in) 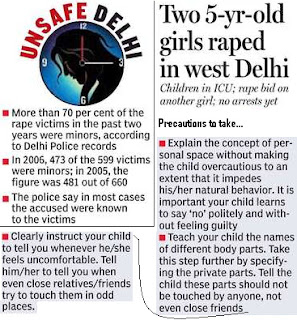 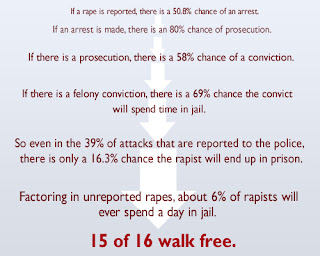 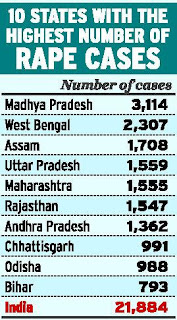 Now,coming to the capital city, Among 35 mega cities in India, Delhi reported 404 rape cases in 2009. The number of kidnapping and abductions of women was 1,379 while reported molestation cases were close to 500.
NCRB statistics also show an increase in reported incest rape cases from 309 in 2008 to 404 in 2009. But there is severe under-reporting of such cases. Crime experts say incest rapes account for the highest number of rapes in the country, with most not reported.
Delhi,the capital of our country has become the most unsafe city for women.As in 2010 a total of 414 cases of rapes,highest among 35 major cities in the country,while Mumbai followed it with 194.

It is what the statistics represent but we all know that statistics always tell the partial truth the real picture can be even more worse…as many of the cases might never get reported either due to the “society-fear” of the victim or by the negligence of the police.

Now regarding the role of Indian Police they have a very sorry mentality that Only bad girls get raped.The victim’s character assassination is the first step taken by the police when they went to lodge an FIR.Where on one hand law state that- “Keeping in view the social object of preventing social victimization or ostracism of the victim of a sexual offence for which Section 228-A (of the Indian Penal Code) has been enacted, it would be appropriate that in the judgments, be it of this Court, or lower courts, the name of the victim should not be indicated.” i.e even the identity of the victim should not be revealed,they not only further harras the victim but they made them feel that they are the only criminals.

In a rape case of Kolkata,this is what the victim said- “When I had mustered enough courage to go to the police station to lodge the FIR, I was harassed. Even yesterday, when I went to speak to the officers with my aunt, they misbehaved with me. Two policemen also made lewd comments,” the victim told the media. “While I was at the police station, the officers remarked that it was Valentine’s Day and asked me if I would go out for a drink with them. I was shocked!” she added.
(Link- http://indianexponent.com/

If it is actually so that only bad girls get raped then I am just unable to figure out how bad are these girls
http://post.jagran.com/

The following link give you a better insight of what police thinks about victim
http://www.ndtv.com/article/india/

It is all just a corrupted mentality which thinks that only girls are responsible.Women are meant to look beautiful and beauty is to be praised and admired,not to be destroyed and humiliated.
The situation is pathetic and the main reason for it are the weak laws against this brutal act.For the laws visit-http://mynation.net/

Everyone is familiar with the case of Ruchika Girhotra(http://en.wikipedia.org/wiki/Ruchika_Girhotra_Case)who was molested by highly posted official S P P Rathore.Because of Rathore’s influence the victim and her family had to face many problems.More to that,being under investigation Rathore was promoted to State Police Chief.On December 22,2009 court sentenced him only to six months of jail and Rs 1000 fine…is a woman self respect that cheap in Indian court?? This raises many question about the security and status of women in India.
Where on one hand,people should change their mentality that it is not the girl who should be blamed and they should treat her with equality,on the other hand laws should be redefined against this brutal act so that these don’t play around with laws.

*All images are sourced from Internet.