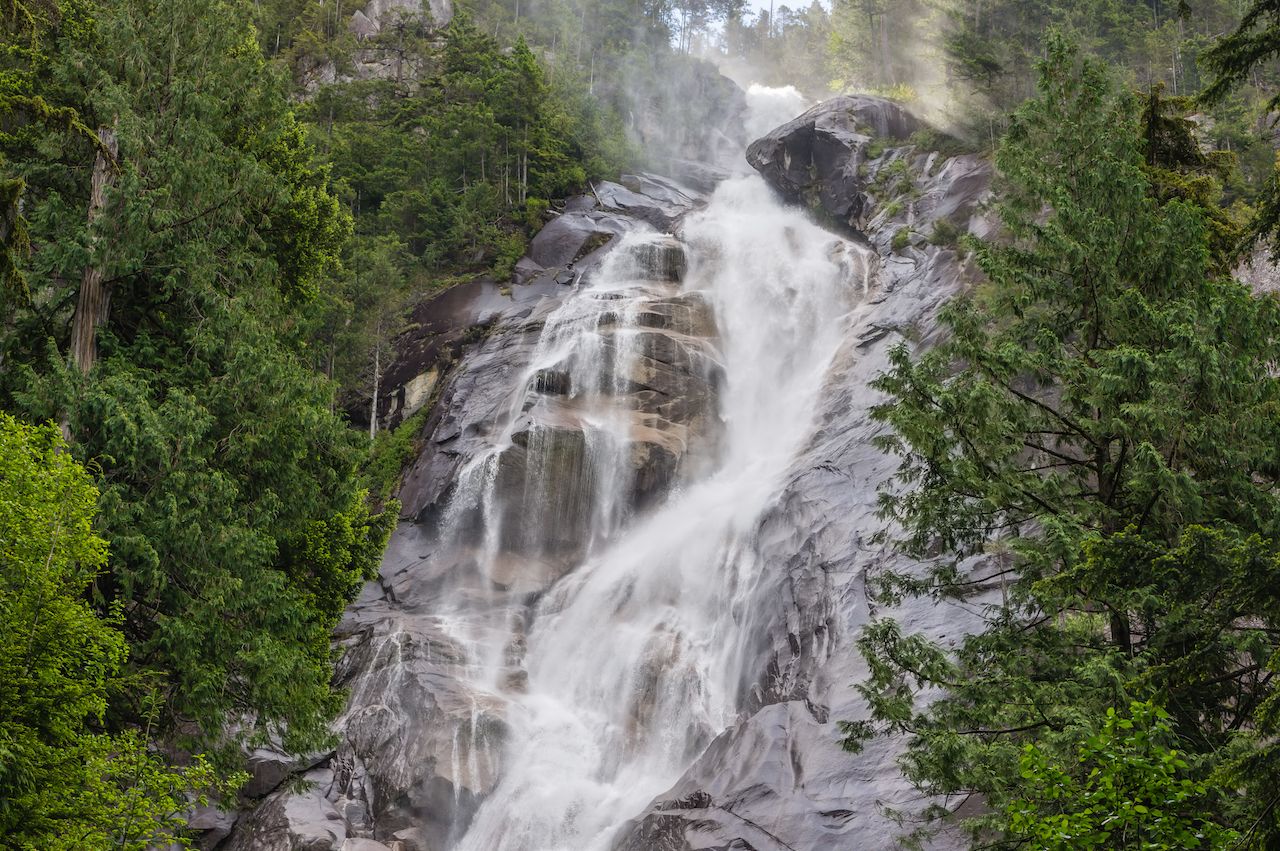 A trio of social media influencers — Ryker Gamble, Alexey Lyakh, and Megan Scraper — died tragically on Tuesday at Shannon Falls, a particularly dangerous waterfall near Squamish in BC, Canada. It is believed that while swimming in one of the pools near the top of the falls, Scraper slipped and fell. While trying to rescue her, Gamble and Lyakh slipped as well, and all three were dragged down by a strong current, dropping 30 meters over the pool’s ledge. Dive teams recovered the bodies on Wednesday morning.

Ryker Gamble, one of the influencers found dead, was known for creating lively travel videos with his friends for their YouTube channel High on Life. They traveled all over the world, visiting destinations in Europe, India, Thailand, Cambodia, Vietnam, Canada, US, Mexico, Peru, Argentina, Brazil, Nepal, and Indonesia. Their Facebook page has over 126,000 followers, and their videos have gained a huge following on Instagram, reaching 1.1 million followers. Lyakh and Scraper (who had been dating for several years) also created video content for the YouTube channel High on Life Sundayfundayz, where they chronicled their travels around the world.

The trio had been friends since high school and remained close their entire lives. “In 2012,” they posted on their page, “we gave up our lease and set out on a big adventure around the world. It lasted seven months and took us to 14 countries and completely drained our bank accounts. We were hooked.”

While travel-based social media content has been on the rise recently, it’s important to remember that some thrills aren’t worth the likes. A waterfall might make an awesome video, but respecting the dangerous nature of waterfalls and exercising caution are crucial.

More like this: Maldives resorts are done with “influencers” requesting free stays

On June 26, the US Supreme Court voted 5-4 to uphold President Donald Trump’s executive order banning citizens of six majority-Muslim nations, along with citizens of Venezuela and North Korea, from entering the United States under most circumstances. The move targets residents of Iran, Libya, North Korea, Somalia, Syria, Yemen, and Venezuela at different levels […]

Cottage with seaweed roof for sale

Ever found yourself thinking that you were born in the wrong time period? Now you can go back to the 18th century by living inside this historic Danish cottage, which has a roof made of seaweed. It might seem a little strange to build a house with seaweed, but it’s actually incredibly sustainable, as well […]

Access to the data from as many as 70 million international travel bookings a day gives quite an insight into industry trends. Just what industry players need as the entrance of mega-international tech groups and the adoption of social media make for cutthroat conditions!   Related Content:  Partnerships, the bedrock of the travel ecosystem Image:  […]

Fun date ideas in NYC for under $50

Let’s face it. New Yorkers are spoiled. We have endless things to eat and places to see, as well as the option to have a unique adventure at any time of day right at our fingertips. With so many choices, don’t let your dates be the same rinse and repeat of grabbing drinks or going […]

Polish musician Daga Gregorowicz reveals the rebellious side of her home city, with its buzzing bars, street art and excellent, cheap restaurants and local cafes Under the tourist radar and just the right size to explore, Poznań is full of surprises, from cafes in hidden courtyards to riverbank summer pop-ups. Its bourgeois facade masks its […]

As the heatwave continues, bookings for foreign holidays are in decline. Yet the industry fears new rules will punish Britain’s hotels After two weeks of scorching sunshine, Britain’s B&Bs should be celebrating a staycation bonanza. Yet as millions head to the coast and countryside in the heatwave, hoteliers are cursing new government regulations they say […]

The ‘Scotland the Best’ author has been touring the country for 25 years in search of its finest places. Here’s his pick of beaches and seaside villages Making a feature of Scotland’s less-travelled coast is a responsibility and a challenge. Even its quieter corners are seeing a tourist boom. Much of the rural north-west, deserted […]

What Can Help Businesses Reach Its Goals?

Goals are a core focus of businesses. They are a driving force in focusing attention on achieving advantageous outcomes. Sometimes there is a clear picture of what those goals might be, such as sales and profitability, improving motivation, or even facilitating planning.That being said, how to attain these might be a little murkier. Because of […]

The Green Economy and Tech Development

As the move into the information and data-driven age intensifies, the green economy is becoming more important. Rather than being viewed as an obstacle or challenge, the new normal of environmental protection must be seen as an opportunity. As with all enterprises, technology will have a role to play and provide opportunities that may not […]

Exam Tips for Students and Parents

Written by Nicole Lipman May 7, 2020May 7, 2020
Saving Bookmark this article Bookmarked

One of the basic needs of any computer system is to protect it from viruses and malware. Hackers are always seeking new opportunities to get access to your data and information. However, not every intrusion into your system is dangerous, but the vulnerability of your operating system can attract dangerous cyber attacks and viruses in […]

How Technology is Improving Businesses in 2020?

Introduction If you look back to 5 years from now you will get surprised that the business has drastically changed. At that time, businesses had not adopted social media. After the integration of social media and consumerism, many businesses took exponential growth. At the same time, many businesses have disappeared from the market who hadn’t […]

Followers App Purpose at a Glance Followers Gallery is recognized as one of the best apps in the market for generating followers. It was designed by a team of academic experts as a response to the growing demand for enhancing a personal or business account performance on Instagram.  As the name indicates, the application’s main […]

We all get heartburn from time to time, often after we have overindulged. But heartburn becomes more familiar as we get older. Millions of seniors live with heartburn, especially nighttime heartburn that keeps them awake. We’re going to look at what heartburn is, its relationship to acid reflux and Gastroesophageal reflux disease, and some non-pharmaceutical […]

Leave a comment
Comments to: Influencers die tragically in BC
Cancel reply