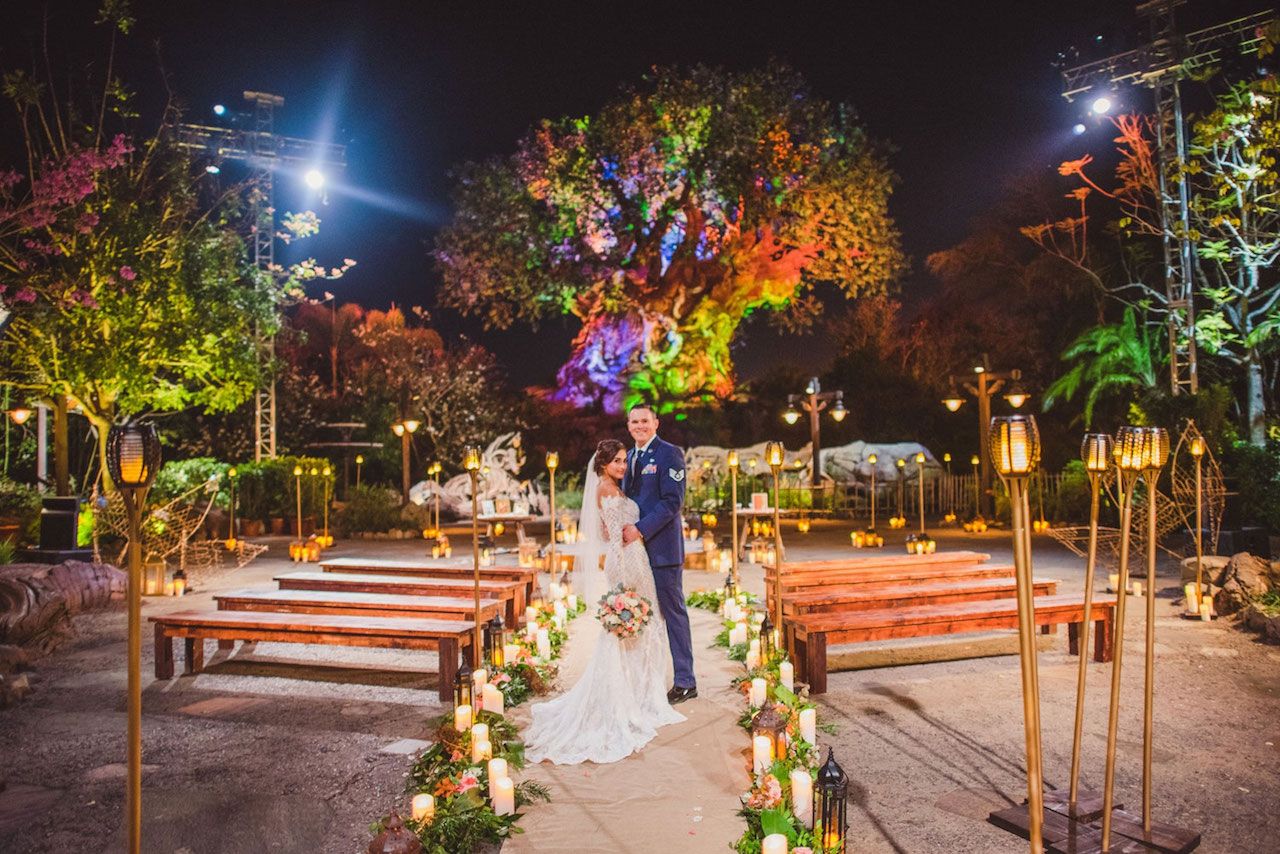 You might not be able to live in Cinderella’s Castle, but that Disney princess fantasy just got a whole lot more attainable. Now you can actually get married in front of one of Disney’s most iconic landmarks: the Tree of Life in the Animal Kingdom.

Disney broke the news on July 5, saying that the tree “serves as the picture-perfect backdrop for a memorable wedding. Lush trees and exotic flowers surround the space, creating an enchanted setting.”

The Animal Kingdom in Orlando, Florida is seeing a resurgence in popularity after the opening of Pandora — The World of Avatar. Disney seems to be capitalizing on the once under-visited park’s newfound crowds by offering this new wedding locale.

But if the Animal Kingdom still isn’t your cup of tea, there are other Disney-themed wedding options available too, like the railroad station at the Magic Kingdom or the Chinese Theater at Disney’s Hollywood Studios. If you or your partner loves Disney, any of these locations could be an ideal spot for your dream wedding.

More like this: Disney announces new “Toy Story Land” to open this summer

The post You can now get married under the Tree of Life in Disney’s Animal Kingdom appeared first on Matador Network.

Nicole Lipman Member since May 9, 2014
Loading + Follow Following
Previous story :How Do You Keep The Documents Safe?
Next story :The Future of Former EPA Chief Scott Pruitt's Anti-Science Legacy

Do you wish to apply a garden wedding concept to your wedding decor ideas? The right wedding planner has a brilliant set of ideas to ensure that he can fulfill your expectations. The wedding should be as close to nature as possible to make things work for your big day. You can easily arrange either […]

Life can be a stressful thing, and particularly at the moment with so much uncertainty in the world. You need at least one safe space in your life, a space that you can go to when you need to relax and unwind, and where you can just be yourself, away from the things that are […]

Sports travel has been big business for years – the World Tourism Organisation (WTO) says it is the fastest growing sector in global tourism, expected to rise at over 40% a year between now and 2021. Yet the unprecedented numbers and range of departure points for the 2018 Football World Cup seem to have concentrated […]

When we talk about the north and the Arctic, most of us picture snow, ice, and the northern lights, with a few polar bears and a narwhal thrown in for good measure. I for one think of dog sleds, biting winds, and the endless dark of winter — I’ve certainly never thought of the far […]

5 spots NOT in Costa Rica guidebooks

Costa Rica isn’t hurting for visitors, and with all those fellow travelers on the road, you might expect it to be difficult to get off the beaten path. But consider this: Costa Rica is home to a full 6% of the world’s biodiversity, and counting, as scientists believe there are still thousands of endemic species […]

The last (plastic) straw: travel and its environmental responsibilities

Some airlines, hotels and tour operators are now addressing the issue of plastics pollution but activists believe the solution requires everyone to take a stand For decades the image of a brightly coloured plastic straw in a cocktail against a backdrop of sea and sunset signalled one thing – carefree holidays. But 2018 is the […]

Cedar Point is to roller coaster enthusiasts what Italy is to foodies. The world’s best roller coasters are packed onto a narrow peninsula jutting out onto Lake Erie, where spectacular water views await atop some of the tallest thrill rides on the planet. Steep drops, neck-breaking turns, and cell-phone-stealing inversions await below. The problem, of […]

Need a hygge? Try Copenhagen for a happiness fix

With its startling architecture and world class food the Danish capital is all about enjoying the good life … at a price. Our writer is also struck by the story behind a statue – and it’s not of a mermaid I arrived at Copenhagen’s Central Station with Danny Kaye’s voice blaring in my head. Maybe […]

Vacation, in its fantasy stages, is sugar for the brain. It’s nirvana at first, and then CRASH — you have to actually start making decisions. Where do I go? How do I get there? How much money do I want to spend? With an RV, most of your questions are easily answered. The only real […]

You’ve probably come across videos of cats getting scared out of their wits once they spot a cucumber around them. In most cases, these cats either flee in fear or bounce into the air. However, the big question is, are cats scared of cucumber? If they are, what is the basis for such a fear? […]

Music is one of the most important parts for students of this generation. Students love to listen to music, but school organizations don’t like that. That’s why they tend to block all kind of music and other entertainment websites. That means you won’t be able to listen to songs when you are using your school’s […]

Which language you should learn in 2020

There is continued development in technology with new changes coming each day. Technologies are being faced out from time to time and therefore, it is important to know what to go for if you care about what is happening in this industry. Programming has largely been affected by new languages emerging and overpowering the initial […]

Leave a comment
Comments to: You can marry at The Tree of Life
Cancel reply