We frequently miss one crucial element that minimizes injury because we are too excited to get onto the weight room floor and push steel: Proper breathing.

How often have you attempted to squat or raise a dumbbell and strained a muscle because you could not breathe properly? Weightlifting demands concentration and also a breath trainer. Proper breathing is crucial during exercise and rest to speed up recovery and increase energy. 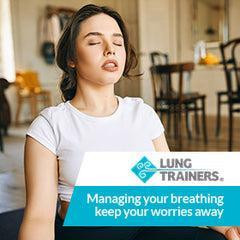 Inhale during the negative movement and exhale during the positive. Please take a deep breath before curling a barbell, and then let it out as you move it closer to your body. Inhale as the legs are extended on a lying hamstring curl machine, and then exhale as you bring the weight toward you.

Exhaling should be done once you have moved past the sticking point, which is the most challenging aspect of the lift. Your muscles are receiving a message from you to loosen up rather than contract. On the other hand, you don't want to hold your breath for an extended period since you risk passing out. It would help if you took nice, little breaths every two to three seconds.

In addition to weightlifters, athletes who engage in explosive movements, such as endurance runners, must also breathe properly because doing so increases their potential force before sprinting.

Always take a deep breath and bend your knees before moving big objects, such as furniture, or lifting hefty boxes. The power that comes from proper breathing will surprise you since it can distinguish between a weak lower back and a powerful one.

The breathing exercises device: Breathe deeply while standing straight up. Exhale as you squat down near your toes. At first, you might think you can't touch your toes, but after attempting this exercise three times in a row while breathing properly, you'll find it easier. This is due to your hamstring and gluteal muscles relaxing due to the oxygen you have absorbed, improving your range of motion. You loud, burley weightlifters in the gym, you grunt every chance you have to show your power and annoy the other people. It would help if you concentrated on exhaling instead of wasting energy making useless sounds.

Also, if you go to the gym to socialize, please be mindful not to interrupt someone doing a lift. Your workout partner can get hurt because of your verbal prowess.

Last but not least, toning your respiratory muscles may breathe in more oxygen and thereby increase your cardiovascular endurance. Your breathing will improve as your endurance increases, increasing your chances of avoiding injury.