Skip to content
0
Disclaimer: This is a user generated content submitted by a member of the WriteUpCafe Community. The views and writings here reflect that of the author and not of WriteUpCafe. If you have any complaints regarding this post kindly report it to us.
A Potpourri of Vestiges Feature 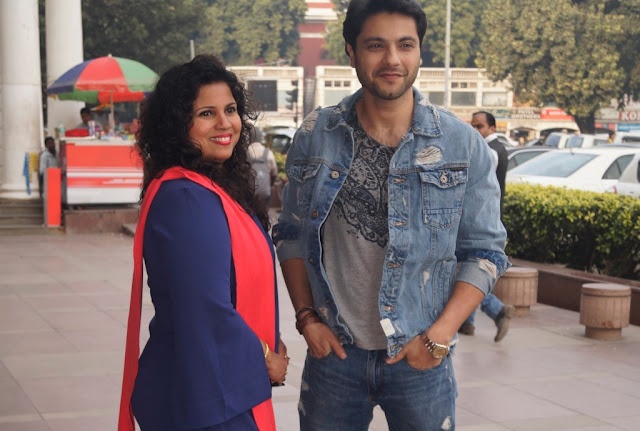 Versatile playback singer of Bollywood Hemaa Sardesai and television actor Mishal Raheja collaborated on an international project. They have made their American debut with brand new single titled track ‘Power of Love’. Both the artists came along together to launch their song out here in Nation’s Capital Delhi at PVR Plaza, CP.

The first Hollywood single by Hemaa was released in Manhattan, New York, this week on Monday. She shared her feelings and thoughts for none other than the World known American Music executive and independent Film Producer in Hollywood, Grammy Award-winning publisher, Tony Mercedes for her latest International track she stated, “This is an inspirational song, I am sure whenever you feel upset this song will cheer you up. ‘Power of Love’ is a hope. We have sung it with full of heart. I am really feeling blessed that Tony Mercedes who is such a personality, believed in me and he loved this song, he even appreciated me in front of abroad media. And I am really happy for Mishaal and my collaboration, and thankful to Indian Media for motivating our work.”
Well, she will be creating history with popular TV actor Mishaal Raheja. Therefore, Mishaal seemed excited about his debut, he told media, “I was a fresher when she called me up for singing, and yes acting I did before, as I started my career from Delhi by serial Love Story, so this time it was something new which I am really excited about, I was really nervous when Hemaa Di and her husband asked me to sing, it started randomly in the car. And then she asked me to start practice for singing, and now we are here.”

And as per what they revealed in the song launch event, Hemaa’s debut single is part of ‘Stronger and Stronger’, an American EP album with Indian singers. This inspirational song talks about making the world a positive place, it was recorded at the Cycadelic studio in Hollywood.
Readers, please feel free to share your opinion by leaving your comments. As always your valuable thoughts are highly appreciated!
Previous Post: Star Wars: The Last Jedi – Movie Review
Complete List of Reviews
http://feeds.feedburner.com/APotpourriOfVestiges

A Potpourri of Vestiges Exclusive 16 year old Iteeva Pande’s life has undergone a dramatic change ever since she auditioned for a Mirinda advertisement early last year. The ad was shot by director Shoojit Sircar who liked her spontaneity so much that he didn’t only finalize her for the ad but also went on to […]

A Potpourri of Vestiges Feature Saawan, directed by Farhan Alam, won the coveted All Lights India International Film Festival (ALIIFF) Golden Frame Awards for the best feature film. The movie shot in Pakistan was produced by USA-based Kalakar Films. While The Loudest Silence from Brazil, helmed by Marccela Moreno, was adjudged as the best student short film. In […]

A Potpourri of Vestiges Review By Murtaza Ali Khan Featured in IMDb Critic Reviews Salman Khan in Race 3 One of the biggest problems with Bollywood these days is that the makers are not willing to take risks. It is formula-based films that are becoming the greatest undoing of Bollywood. Race 3, the latest installment in the popular […]

A Potpourri of Vestiges Feature Godless follows the fates of Frank Griffin and his murderous gang… of Roy Goode, the member who turned against them… and of La Belle, the town full of women who must defend themselves when they get caught in the crossfire. Welcome to Godless country.  Godless, a Netflix Limited Series, coming […]

A Potpourri of Vestiges Feature Divya Khosla Kumar who will be soon seen in T-Series first ever short film that will be released digitally on 7th Dec had a very funny encounter during the shoot of BULBUL. While shooting for a scene in Mumbai, Divya was in the character of a sardar which ended her […]

A Potpourri of Vestiges Feature Play This is a story about a music band called ‘Qabila’ whose members are in constant tussle with each other. A competition leads them to Sri Lanka where they have to tweak the team dynamics to accommodate a popular singer, which further disturbs their internal equations.How they fight their inner […]

Bring Out the Patriot in you this Republic Day Special

A Potpourri of Vestiges Feature Though we don’t need a day to celebrate patriotism, but every 26th January and 15th August we Indians feel more patriotic. Don’t we? And how do we celebrate this day? Catch the awe-inspiring military parade on TV, listen to our President’s Speech, play some patriotic songs…. And then how about […]

A Potpourri of Vestiges Review By Murtaza Ali Khan Featured in IMDb Critic Reviews Baadshaho is the latest offering from the renowned Indian filmmaker Milan Luthria who is known for blockbusters like Once Upon a Time in Mumbaai and The Dirty Picture. Written by Rajat Arora, Baadshaho stars Ajay Devgn, Ileana D’Cruz, Emraan Hashmi, and Vidyut Jammwal in […]

‘Bright’ Trailer: Will Smith and Team Bright in Mumbai on Monday for Red Carpet Premiere

A Potpourri of Vestiges Feature Set in an alternate present-day, this action-thriller directed by David Ayer (Suicide Squad, End of Watch, writer of Training Day) follows two cops from very different backgrounds (Ward, a human played by Will Smith, and Jakoby, an orc played by Joel Edgerton) who embark on a routine patrol night that […]

A Potpourri of Vestiges Feature Zee Classic, committed to promoting the classics of Indian cinema, is set to premiere Haqeeqat, the Chetan Anand classic based on the 1962 Sino-Indian War, on coming Independence Day at 8:30 AM. As we are aware, India would be celebrating its 71st Independence Day on August 15, 2017. Naturally the […]

A Potpourri of Vestiges Feature We are almost done with 2017 but looks like the rest of the 2017 as well as the coming year 2018 is going to be magnificent for most of the Bollywood fans.Some of the upcoming movies of 2017 and 2018 are going to major blockbusters. We are heading towards months filled […]

A Potpourri of Vestiges Feature Source: YouTube The trailer of the much-awaited Rakhi Gulzar directorial ‘Raazi’ is finally out and it looks stunning to say the least. Set in 1971 and inspired by true events, Raazi stars Alia Bhatt in the role of an Indian woman who gets married to a Pakistani but her actual […]

A Potpourri of Vestiges Feature There was a time when getting a laptop was a big thing and later on when laptops were really made affordable, then the specifications it came with was not good. For better specifications, customers were made to pay the heavy amount of money. That time has long gone. Now we […]

A Potpourri of Vestiges Feature Whether you’re a poker superstar or totally clueless in the casino, there’s something about gambling movies that excite people. Nothing glamorizes the world of high-stakes games like Hollywood, and it helps when the characters on-screen aren’t playing with real finances.  VegasSlotsOnline.com have put together an infographic detailing all the greatest on-screen […]

A Potpourri of Vestiges Feature Netflix Inc., the world’s leading internet entertainment service, today announced a new multilingual Netflix original series, based on the book, Bard of Blood, in partnership with Shah Rukh Khan’s Red Chillies Entertainment. Penned by the young Indian author, Bilal Siddiqi the book will be brought to life as an eight-episode […]

A Potpourri of Vestiges Feature Read Our ‘Sacred Games’ Review Netflix’s first Indian first Original series ‘Sacred Games’, based on Vikram Chandra’s book is finally here. With a stellar star cast, excellent directors, and a compelling plot, ‘Sacred Games’ is a story of friendship and betrayal, redemption, violence and the characters’ intertwined lives, set against […]

A Potpourri of Vestiges Review By Murtaza Ali Khan The long wait is finally over. The eight season of Game of Thrones premiered some time back. But before I make any revelations I must flash the mandatory SPOILER ALERT! Remembering my post from a couple of years ago, I had described Season 7 Episode 7 […]

A Potpourri of Vestiges Review By Murtaza Ali Khan Thanks to the recent success of films set in the Hindi heartland, Bollywood filmmakers these days are very keen on making more such films. The basic idea is to woo the audiences in tier-2 and tier-3 cities spread across north-central India. Also, a major chunk of […]

A Potpourri of Vestiges Feature With such a broad range of slot games and online casinos on the web, at sites such as megareel, it can be intimidating to make sense of all the offers available. The rules of a traditional slot game are relatively easy to follow, but new and advanced games can contain […]

Written by Murtaza Ali May 6, 2019May 6, 2019
Saving Bookmark this article Bookmarked

Blackboard Vs Whiteboard is a Special Film

A Potpourri of Vestiges Feature Released Today, Blackboard Vs Whiteboard is a movie that shows now education is considered as a source of business. Not only the cities but even small towns and villages are indulged in the evil malpractices. There are a few idealistic teachers who are trying to put irreverent work of education […]